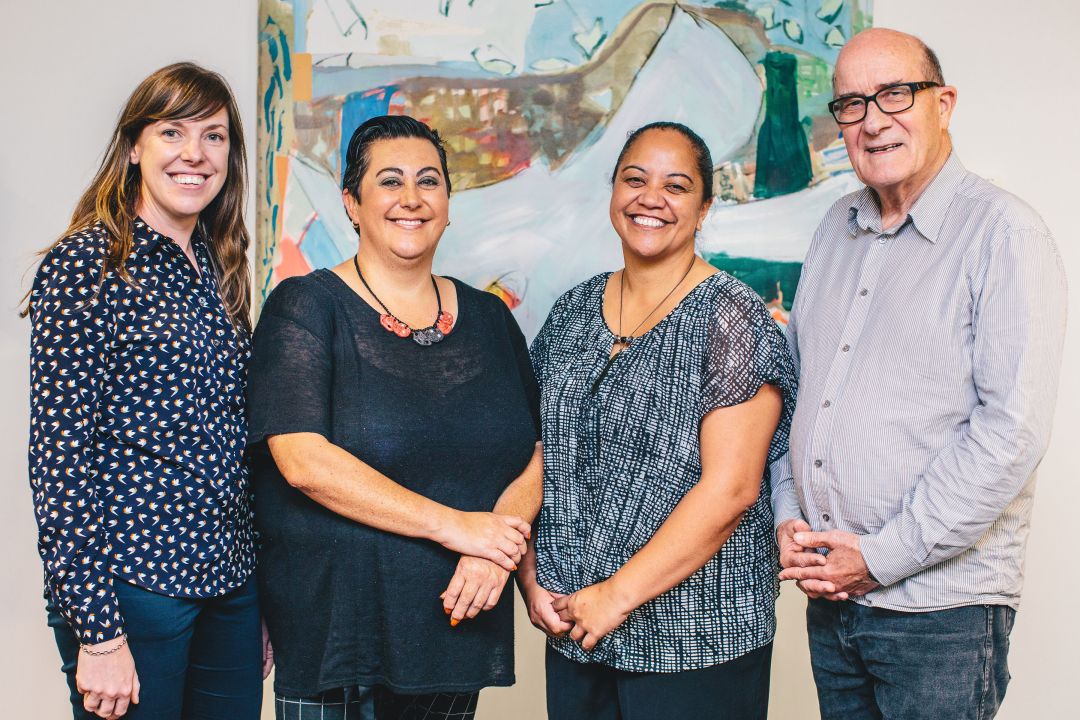 Rangahau rōpū. Meet the AUT Law team on the project

Today we share stories from our rōpū members from AUT Law and share our passions for re-envisaging the criminal justice system.

Katey (Ngāti Pākehā) grew up in the Ōtautahi beach town of Matuku Takotako (Sumner) and now lives with her partner Ryan and their two tamariki in rural Raglan’s coastal area of Ruapuke, nestled under Karioi maunga. She feels a connection to Kōtarana where many of her ancestors on both sides traveled to Aotearoa to settle in Ōtautahi. She loves gardening where she spends a lot of time dreaming of living off the land full-time.

Katey is a senior lecturer and social justice researcher exploring the intersecting worlds of mental health, addictions and the law. Her strong sense of social justice was initially spurred on when she witnessed the moral panic surrounding dance music scenes in the 90s, which to her seemed founded on myths when contrasted to her own experiences. While studying sociology, Katey felt compelled to research ecstasy use at dance parties and draw on the expertise of users to come up with strategies that might reduce any harm that came from drug use. It was at this time that Katey realised the power that comes from research which listens to those who are closest to the ‘problem’ identified by society to then come up with solutions. One solution that came out of this research was the use of pill testing at music festivals so users could adjust their practices according to whatever results they were provided. This approach relies of seeing users as experts in drug taking and therefore reducing harm, but is still to be fully accepted by communities and government (the research was done in early 2000s, progress is slow). Shout out to Know Your Stuff New Zealand, a group of volunteers who provide free pill testing at festivals.

Katey then moved on to researching human rights and mental health law, and later, exploring the world of specialist courts. Within the latter space, Katey saw the positive impacts of peer support in Te Whare Whakapiki Wairua (The Alcohol and Other Drug Treatment Court). She observed that those with lived experience of the systems walking alongside others currently in them was a positive experience for most, but still unacknowledged for its strengths by many professionals. Her passion for wider recognition in law and policy reform of the expertise that comes from lived experience was (re)stirred, leading to the development of this project!

Katey, with the support of her friends and colleagues from AUT Law and Health, put a proposal together to pitch to the Borrin Foundation. Finding out they were successful was amazing feeling for Katey, and, as with many projects before, she now partners with Stella Black to make sure the project runs according to the plans created with wider rōpu in true co-production style.

Khylee is from the iwi of Te Roroa/Ngāpuhi and Ngāti Porou. As an Associate Professor teaching law at AUT’s Manukau campus, Khylee aims to provide equitable access to professional degrees for Māori and Pasifika students in their own communities. She is passionate about shaping curriculum to reflect the legal issues affecting those communities and developing strong relationships with her students and their whānau. Outside of her work, Khylee is a mother of three, a sci-fi Star Wars and Doctor Who geek, sporting a tattoo stating ‘May the Force Be With You’ in Māori.

In one of her many roles supporting communities, Khylee sits on the Drug Foundation Board. Over the last few years she has spoken about the drug law reform in Aotearoa. One of her keynotes entitled, “nothing about us, without us” affirmed the need for any drug law reform to involve Māori and Māori ways of thinking, being and doing – view below.

Recently, Khylee was appointed to the PM’s Expert Advisory Panel on Cannabis, facilitated by Dr Juliet Gerrard, Chief Science Advisor. The Panel’s role is to synthesise the evidence from our varied disciplines and present their review in an accessible document for the public so that voters have the best evidence on which to make their choice at next year’s referendum.

Khylee also writes cultural reports which judges use at sentencing. Cultural reports help judges gain a wider picture and be better equipped to tailor appropriate interventions and supports for offenders appearing before the courts. Khylee believes cultural reports fill a massive gap which probation reports leave by contextualising the background to offending. From her experience of completing over 100 reports, Khylee has found that offenders may well have caused terrible harms to other people but have always also had horrific harms perpetrated on them too. The impact of her cultural reports for offenders is substantial – in one case her report led to district court Judge Soana Moala to reduce a woman’s prison sentence by a third because of her Māori cultural background and deprivation.

Supporting urgent institutional change to the way Oranga Tamariki operates is another important aspect of Khylee’s mahi, where she argues for allowing Māori to be in charge of their own whānau. Khylee has been involved in a project, funded by Ngā Pae o Te Māramatanga, that closely analysed the Oranga Tamariki Act, with the overriding intent of ensuring that tikanga Māori is at the forefront of all decision-making concerning the well-being of whānau in crisis. Long term, the intent of this research is to produce information for use by iwi or Māori organisations and the Government to strengthen and empower whānau and provide opportunities for strategic partnerships.

Khylee continues to contribute her expertise and experience to He Ture Kia Tika as a core member of our rōpū.

Stella is of Ngāi Tūhoe, Whakatōhea and Ngāti Whakaue descent. She has two daughters and, together with her partner Kevin, lives in Mt Maunganui. One of their favourite things to do is escape to Te Urewera where they have been building a whare in Maungapōhatu.

As a Māori researcher, Stella brings her love of working with Māori, young and old, to a range of topics. Her previous research has spanned mental health, addictions, palliative and end of life care, prostate cancer, lung cancer and specialist courts. A common thread across her research is a commitment to kaupapa Māori ideologies and turning her attention to highlighting inequities and areas for improvement that align with community based solutions.

Within the criminal justice sphere, Stella has developed a passion for researching ngā Kōti Rangatahi, so much so that she has dedicated her PhD to this initiative. Ngā Kōti Rangatahi are courts that monitor family group conference plans on marae and involve kaumatua and tangata whenua alongside judges and youth justice professionals.

Stella is a founding member of Auckland University’s Te Arai Research Group for palliative care and end of life research (see https://tearairesearchgroup.org/). Her research with Te Arai has explored loneliness, social isolation and whānau caregiver experiences of end of life. Stella has a particular interest in this area of research having provided care for both of her parents before their passing. You can see part of her story of whānau caregiving below.

Stella is the project manager of He Ture Kia Tika and sees this as an opportunity to extend her reach into working with Māori communities to create positive change for Māori whānau.

Warren comes from Takapuna on Auckland’s North Shore. He comes from a keen yachting family but these days is more likely to be seen on the saddle of a motorbike or a mountain bike. Warren also enjoys attending art openings with his wife who is an exhibiting fine artist.

The founder of AUT’s Centre for Non-Adversarial Justice and Professor of Criminal Law, Warren also teaches criminal law and mental health law and has written and researched extensively in these areas. He believes therapeutic jurisprudence is one of the most pivotal contemporary developments in law. Therapeutic jurisprudence aims to examine the way in which the law can reduce the harms it causes to victims and offenders, and instead leave everyone better off after interacting with legal processes and systems.

Warren was also a founding trustee of the Odyssey House Trust for the rehabilitation of people experiencing addiction. More recently in 2018 he was appointed as a Leverhulme Trust Visiting Professor at Northumbria University in Newcastle England. The Visiting Professorship involved giving a series of public lectures on mental health law, therapeutic jurisprudence and related topics.

Today, Warren enjoys working with his colleagues in AUT’s supportive collegial environment and with the wider rōpu on this project. Warren is the nominal overseer of the project supporting the great work being done by Katey and the team.